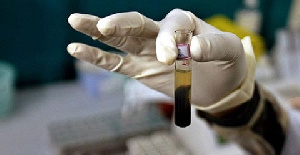 Healthcare workers in Cameroon are marking World Hepatitis Day (July 28), to raise awareness of?the virus, which causes inflammation of the liver and kills about 300 people per day in Sub-Saharan Africa.?

While global coverage of a birth dose vaccine for Hepatitis B is 43%, according to the World Health Organization, only 6% receive it in the WHO’s African Region, which does not include Egypt, Eritrea, Libya, Somalia, or Sudan. In Cameroon, health officials have begun dispatching healthcare workers to find hep B patients who are avoiding treatment and getting the vaccine for their?newborns.

Farmer Valerie Mbappe, 52, said she was diagnosed with hepatitis in April.

But she was reluctant to go to a doctor because her uncle told her she should be treated by a traditional healer.

After going to the healer, Mbappe’s abdominal pain, fatigue and fever have gotten worse.

She said now that she knows that she can be treated at the hospital, her advice is that people should not be reluctant to visit health facilities for their hepatitis screening. She said she was told by the nurse that she should stop drinking and smoking heavily because it may lead to complications during her treatment.

Mbappe was brought to the General Hospital in Yaoundé by members of SOS Hepatitis, a charity group that helps patients seek treatment.

Spokesman for the group Samuel Yamissi said the efforts are part of this year’s World Hepatitis Day activities, marked annually on July 28.

He said their main target is the majority of patients who refuse to go to hospitals and prefer traditional treatments.

But Cameroon’s Ministry of Health says 13 percent of people are living with hepatitis B in the country of 25 million.

Despite the high rate of infection, the ministry says less than 1,500 Cameroonians are receiving treatment.

He said to encourage patients to go to hospitals, the government reduced the cost of treatment from $250 per month to less than $50.

“Since it is a slow killer disease, which symptoms only appear when it has already reached its climax, get tested, get vaccinated. Keep away from unprescribed medications like anti-inflammatories like Paracetamol,” said Eyong.

Cameroon’s 360 government hospitals this year for the first-time dispatched health workers to track patients and ensure they get their treatments and vaccines.

He spoke via telephone from the northern town of Garoua.

Sajo said the government has given firm instructions that all newly born babies, all mothers, and all pregnant women should be screened and vaccinated against hepatitis B. He said the government has also given instructions that everyone tested positive should be treated immediately. The only challenge they have, said Sajo, is meeting the so many mothers who never visit hospitals and prefer to deliver at home.

Others rely on traditional healers and only go to hospitals when their health becomes critical.