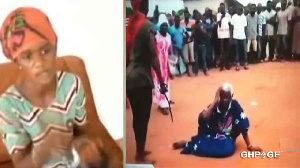 Latifah Bumaye, the lady in the viral video who led the lynching of 90-year-old Madam Akua Denteh has been arrested by the Salaga Divisional Police Headquarters. She was apprehended at Kejewu Bator.

The lady upon arrest told the police she was unaware of what she was doing as some men had caught her forcibly and applied a powdery substance on her face preceding to the unfortunate incident.

Speaking whilst in custody, Latifah Bumaye during interrogation told the police that she had no idea what came over her and when she saw the video seriously whipping the now-dead 90-year-old woman, she was shocked and asked those around where she got the different clothes from when she was previously in cloth.

Latifah Bumaye was captured in the video whipping the old lady she said was her grandmother, in broad day amidst chanting and shouting from observers after Akua Denteh was ridiculed for being a witch by a supposed witch-doctor, Filin.

Filin was also captured on camera hitting the deceased repeatedly with something veiled in a cloth.

The Salaga Divisional Police Commander C/Supt. Amos Yelisong had told Zamireports that the suspect had been on the run since July 23.

She was subsequently arrested at her hideout at about 09:30 pm on Thursday after someone tipped the police off.

“On 30/07/2020 information was received, by C/Supt. Amos Yelisong, the Divisional Commander, Salaga indicating the hidden place of one of the suspected Principal murderers in the deceased Akua Denteh case,” Zamireport said.

“The information was processed into intelligence and two Man Police team from the Salaga Division despatched by the Divisional Commander and the District Officer to Kejewu Bator, a fishing community under Abrumase Police Station within the Salaga Division”, the report further stated.

Ms Bumaye did not deny that she was the one in the video but said she was not aware of what happened.

This is the seventh person arrested in connection with the crime including the chief of the town.

Other persons who have since been arrested include, Haruna Aness – 34, Issifa Tanko- 35, Shaibu Muntala – 29, Sulemana Ali -35 and Issifa Zakyibo -32 who are assisting police to unmask the rest.

Watch the video below