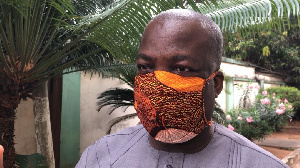 The Electoral Commission (EC) has disclosed that multiple registrations has been detected nationwide in the ongoing voters registration exercise.

According to Director of Electoral Services at the EC, Dr Serebour Quarcoo, the detection was made during a deduplication exercise by the elections management body.

The deduplication exercise, he explained, involves matching the pictures to fingerprints of persons who have registered to detect the duplication.

Dr Serebour Quarcoo told the Daily Graphic newspaper on Wednesday, July 29, 2020, that an adjudicating committee would sit on the issue on Monday, August 3, 2020.

“I cannot put out figures [of the detected duplications] now because we are currently working on it, but, it will be ready by Monday,” he told the Daily Graphic newspaper.

Dr Serebour also told the state-owned newspaper that the names of persons who would be confirmed to have engaged in multiple registration would be deleted.

“A properly functioning biometric system will clean itself up! There won’t be duplicates! It’s like trying to set up an email with a name already taken. It won’t happen because the system won’t let you proceed,” he wrote in a Facebook post.

He said the detected duplications brings to question the $100 million spent on acquiring new Biometric Voter Registration kits for the exercise.