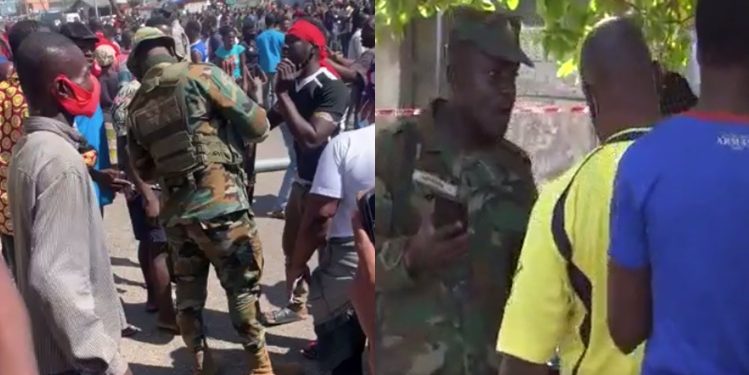 Officials of the opposition party insist such actions are calculated attempts by the governing New Patriotic Party to suppress votes in the NDC’s strongholds.

The NDC released the visuals following a challenge thrown it by the Minister of Defence, Dominic Nitiwul for the party to provide evidence of its military intimidation and voter suppression claims.

Addressing the press at the NDC’s headquarters in Accra, National Communication Officer of the party, Sammy Gyamfi, referenced recent pockets of violence at some registration centres and developments at Banda where residents in settler communities were allegedly prevented by the military from registering in the voter registration exercise.

Mr. Gyamfi also spoke about other incidents in the Asougyaman Constituency, Atiwa East Constituency and other parts of the Eastern Region.

In the Ahafo Ano North Constituency, Sammy Gyamfi insisted that the armed military personnel deployed to that area were “aiding Electoral Commission Officials to deny hundreds of people of northern descent, predominantly of the Grumah tribe from taking part in the Voter Registration Exercise, despite majority of them possessing Ghana Cards, one of the requirements needed to register. Their only crime according to their oppressors is that, they do not bear Akan names and therefore cannot be identified as hailing from the Ahafo Ano North Constituency.”

“Not even the presence of the media to highlight these obvious infractions of the law has been able to convince the EC and the armed military men deployed to the area to allow these Ghanaian citizens to register,” he added.

In the Sekyere Afram Plains Constituency, Mr. Gyamfi said on Thursday 9th July 2020, when NDC supporters in accordance with Ghana’s electoral laws challenged some registrants in the area on grounds that they were not residents of the area “were arrested by the military and beaten to pulp and locked up at the Drobonso Police Station based on the suspicion that they were foreigners.”

Shut up if you’ve nothing to say

Sammy Gyamfi also took on the Minister of defence who challenged the NDC to back its claims with evidence.

“Dominic Nitiwul should stop the unlawful use of armed military men to harass innocent Ghanaians based on their tribe or ethnicity in the ongoing voter registration exercise, if he still has a conscience or shut up and spare us his lies if he has nothing meaningful to say. We have had enough of their chicanery and insults,” Sammy Gyamfi said.

Click here to read the full submission by Sammy Gyamfi during the release of the visuals: