According to the president Archives - <<AGHS >> 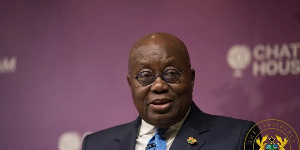 President Nana Addo Dankwa Akufo-Addo has described the leader of the opposition, National Democratic Congress (NDC), John Dramani Mahama as one that presided over what he calls the worst statistics of Ghana’s economic history. This follows various calls by the opposition NDC describing the almost four-year tenure of the ruling party as a socio-economic failure. According to the president, the John Mahama […]