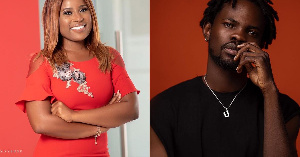 Ghanaian highlife musician, Fameye has referred TV3’S anchor Berla Mundi to a rude experience he had with her during his ‘struggling days’.The “Nothing I Get” hitmaker wasn’t afraid to tell Berla Mundi the exact demeaning statement she made when he appeared on a radio interview with her some years ago. According to Fameye, he attended an interview on Berla Mundi’s show on radio […]